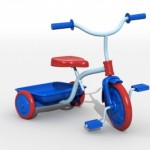 No gender allowed at preschool; ‘Him’ and ‘her’ nixed to keep boys and girls equal. This was the title of an article published earlier this year by the Associated Press. In it, the AP staff writer describes a Swedish preschool called “Egalia”.

Where staff avoid using words like “him” or “her” and address the 33 kids as “friends” rather than girls and boys. From the color and placement of toys to the choice of books, every detail has been carefully planned to make sure the children don’t fall into gender stereotypes.{It] is among the most radical examples of Sweden’s efforts to engineer equality between the sexes from childhood onward. Breaking down gender roles is a core mission in the national curriculum for preschools, underpinned by the theory that even in highly egalitarian-minded Sweden, society gives boys an unfair edge. Some parents worry things have gone too far. An obsession with obliterating gender roles, they say, could make the children confused and ill-prepared to face the world outside kindergarten.
Nearly all the children’s books deal with homosexual couples, single parents or adopted children. There are no “Snow White,” “Cinderella” or other classic fairy tales seen as cementing stereotypes. Egalia places a special emphasis on fostering an environment tolerant of gay, lesbian, bisexual and transgender people. From a bookcase, [the school director] pulls out a story about two male giraffes who are sad to be childless – until they come across an abandoned crocodile egg.

Critics point out that “different gender roles aren’t problematic as long as they are equally valued”. Proponents argue that by creating a gender neutral environment in a sense, you are setting the groundwork for the way kids think. Recently someone pointed out to me that, for example, 90% of the children’s books have male main characters, even when they are animals. Another common example is that most people will refer to stuffed animals or any animal they see as a “he”. For some reason that’s the way we have been programmed. That is not to say that by having male characters in books, boys are somehow better than girls, it’s that kids need to be able to see themselves in the characters they admire. It’s important for girls to see girls and women in books doing things that they would want to do.

So I do believe that gender neutral language and play is important. And there is also research that backs up this notion. For example, Judith Elaine Blakemore, professor of psychology and associate dean at Indiana University−Purdue University in Fort Wayne, Indiana has shown that toys rated as most likely to be educational and to develop children’s physical, cognitive, and artistic skills are typically categorized as gender neutral or moderately masculine (on a 5-point scale ranging fro strongly feminine to strongly masculine). Examples of neutral toys are Vinnie the Pooh, Elmo, a Doctor’s kit, gardening tools, play-doc, etc. (for a taxonomy of toys categorized by gender type see Characteristics of Boys’ and Girls’ Toys). In other words, strongly gender-typed toys appear to be less supportive of optimal development than neutral or moderately gender-typed toys.

Is this a topic that’s worth more discussion? How is this issue, if at all, being addressed at your child’s school today?

This entry was posted in Gender and tagged Gender, Masculine, Preschool, Toys. Bookmark the permalink.

One Response to Are you letting your child play with gender neutral toys?