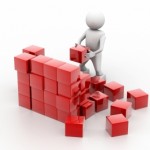 I always thought there was something more to playing with blocks than simply the resulting creations of building, vehicles, figures, and every other kind of object stemming from the imagination of kids of all ages. Now, in a study published in Mind, Brain and Education, researchers at Temple’s Infant Lab found there are some very real benefits to playing with blocks. The researchers found that when playing with blocks under interactive conditions, children hear the kind of language that helps them think about space. Spatial skills are important for success in the science, technology, engineering and mathematics (STEM)  disciplines. ”This study gives parents news they can use. It shows that, rather than leaving kids alone with a preassembled activity, interactive play that draws out conversation is best at facilitating spatial development,” sail Nora Newcombe, co-director of Temple’s Infant Lab.

So there are benefits to young kids, but I wonder if there are also benefits to adults. I certainly take every opportunity to use my son’s Lego blocks – naturally under the guise of helping him. Apparently I’m on of many. According to the Wall Street Journal article For Some Grown-Ups, Playing With Legos Is a Serious Business, not only are there thousands of AFOLs (Adult Fan of Lego) worldwide, some of them make money building Lego sculptures. For me this activity is akin to what some may experience in yoga – focused, concentrated time where the mind does not wonder beyond the task at hand. It also happens to be fun family time and as I just learned facilitates the development of my child’s spatial vocabulary.